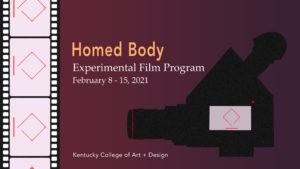 KyCAD is hosting an experimental film program in conjunction with the studio course “Homed Body: Performance, Conformity, and Madness.” The program will include a screening of short, experimental films from Canyon Cinema’s collection, a panel discussion that celebrates experimental cinema, and a screening of student films. We invite you to join us in our exploration of the homed body as a site for critical reflection and creativity.

Available on KyCAD’s website from February 8th to February 13th:

Please register for the film screening.

Please join us and our esteemed panel as we engage in a conversation around experimental cinema and the program’s theme: bodies conditioned by the home and homes brought to life by the presence and performance of bodies.

“It felt like home, being here, and she raced through the days with their small ravishing routines, days the same, paced and organized but with a simultaneous wallow, uncentered, sometimes blank in places, days that moved so slow they ached” (Don DeLillo, The Body Artist).

“Homed Body” is a compilation of three short films. These films take a closer look at my own domestic space and interrogate the notion of home as something fixed. Over time the house changes, interior spaces are reconfigured, exterior features are updated, lives are redefined, and the home shifts in response to the loss of life. Through the home I explore a series of questions: When do we become numb to our surroundings? What does home mean as a black female? How is the black home rendered invisible by the hypervisibility that is placed on its inhabitants? Can the home be a space of resistance? I approach the home as the first space that shapes experience and perception.